Have you ever reflected on the word ‘doing’? ‘Doing’ points to performance, achievement, effort. It also implies that there’s a ‘doer’ who engages in ‘doing something’, and that there’s a passive element or ‘the thing that’s being done’.

But does it work that way? Is there a separation between the thing that ‘does’ and the thing that’s ‘being done’? Or is the thing that does actually what’s being done and vice versa? Ancient Taoist writers might urge us to think about ‘doing’ (and ‘not doing’) a bit differently than we’re used to. At the root of Taoist philosophy lies the idea of an all-encompassing force called Tao, from which all elements of the universe derive.

From this viewpoint, everything happens as a whole, meaning that activities that seem isolated, individual, and independent are part of one big, cosmic dance. This means that when we stop ‘doing’, from a human perspective at least, the universe (including ourselves) is still moving on.

The Tao is the natural flow of existence in which things aren’t forced or controlled but allowed. This means that it’s not entirely clear who or what is the doer, and who or what is being done. Things just happen, so it seems. The flow of existence is something we can live by or resist. If we follow the Tao, our lives will be easy. But if we try to resist, our lives will be difficult.

When we’re mainly focused on striving and straining, because we’re convinced that only through ‘effort’ we’ll get where we need to be, we may be swimming against the stream. So, what if ‘doing’ isn’t always necessary to get things done? What if many of our actions are a waste of time and energy? What if we can take shortcuts in life, if we learn how to embark on the natural course?

This video explores the paradoxical art of doing without doing, and how we can live life the smart way.

1) Are we doing or being done?

The relationship between humans and the environment is similar. Even though we think we’re separate from our surroundings, we still need a ground to stand on, food to eat, and oxygen to breathe. If we take a look at our breath, for example, we’ll see that we have a choice: when we’re conscious of it, we can control the breath, but for the most part, the breath happens to us. We can’t live without the breath, and the breath can’t exist without us. So, who’s the doer, and who’s being done?

This system of interdependence is the reason that nothing can arise without an equal opposite. These opposites continuously move around a center, attracting and repelling, influencing, and being influenced, merging, separating, being part of one big organism; one big happening. And this system, always in motion, is the flow of the universe, or… Tao.

In this grand manifestation, we’re as much human as we’re the universe. Is a drop of water in the ocean a drop or is it the ocean? And when the ocean waves, is it the drops of water that make the waves, or the ocean as a whole? Terence James Stannus Gray, also known by the pen name Wei Wu Wei, put it beautifully, and I quote:

We are products of our circumstances, the play decides our role, the environment makes us instead of the other way around. As long as there is a ‘you’ doing or not-doing, thinking or not-thinking, ‘meditating’ or ‘not-meditating’ you are no closer to home than the day you were born.

As human beings, we’re part of and subject to the greatness of the universe, but we also are the universe. And the universe has a way of its own. Like a river, it flows at its own pace. Knowing the Tao, therefore, means becoming aware of the flow of life. And once that happens, we can flow with it, effortlessly, and let life carry us, instead of us carrying life.

However, this is not what most people do…

2) Resisting the flow of nature

Force is followed by loss of strength.
This is not the way of the Tao.
That which goes against the Tao
comes to an early end.

The Tao represents natural order. It doesn’t force but allows, and everything falls into place. But this rather passive and accepting stance is not endorsed in our culture. We are encouraged to always be striving, always be acting, never be idle, not wait for things to happen but make things happen.

We seem to believe that progress and change are products of action only and that if we let nature run its course, everything falls apart. But this collective pathological need for control leads to us building sandcastles in the surf. We fight uphill battles, sail off against the wind,  and we’re exhausting ourselves doing so.

We can fight aging, for example, as much as we want by undergoing surgery, by using special anti-aging creams and hair dye, but no one has ever escaped the decay of our bodies aside from those who died young. Like apples, we grow, and then break down and die. How much energy do we spend to fight this inevitable part of life? How much strength can we save by not seeing aging as such a big deal, and allow for change to occur?

The same goes for time. What’s gone is gone, what’s ahead lies ahead. We can hold on to a rock, unable to let go of times that lie in the past. By doing so, we don’t see what’s unfolding to us in the present, as we’re only interested in preserving what cannot be preserved, which is the past. In this case, we’re doing, but nothing is getting done.

So, the problem with going against the flow of life is that we’re part of it anyway. No matter how tightly we grab a rock or a branch, no matter how fiercely we swim against the stream, the river still carries us in a certain direction, whether we like it or not. It’s unavoidable.

Nevertheless, waging war against the flow of life is considered the normal thing to do. For some reason, always choosing the path of most resistance deserves respect, even when the results are questionable. But what’s normal isn’t always good, and what’s good isn’t always normal. Sometimes it’s better not to follow the herd; especially if the herd’s behavior gets us nowhere.

So, what can we do instead?

Therefore the Master
can act without doing anything
and teach without saying a word.

Things come her way
and she does not stop them;
things leave and she lets them go.

The essence of doing without doing is getting things done without taking action, or without effort. Doing nothing means that we let nature do its work, as much as possible. We don’t control but delegate. We don’t force but allow.

The more we allow things, the more order we will have, as the flow of nature is the order in itself, and disorder appears by our interventions. If we’re too busy grasping, we aren’t open to the things coming our way. When a fisherman is impatient he’ll only scare the fish away, but when he’s patient the fish might come to him.

Doing without doing is the way of the shortcut. “The easy way,” as Alan Watts put it. It’s the art of using any situation to our advantage. There are ways to accomplish this. It all starts with achieving a state of ‘stillness’, in which we observe and let the dust settle, so we make room for the world to unfold. Instead of trying to figure things out (which often leads to overthinking) we relax and let the insights arise naturally.

By being still, it’s also easier to adapt to the current situation, as we’re in a state of observance. Adaptation and flexibility are key if we want the easy way because every set of circumstances has its advantages, threats, and opportunities. When you can’t leave the house, for example, the easy way is to focus on tasks you can do inside and around the house. And when you’re in traffic in another country, instead of trying to control and impose your will on this alien situation, the easy way is to go with the flow, and ‘be led’, instead of leading.

But it’s also a matter of figuring out the course of the water current so we can get a free ride, so to speak. The sailor who’s aware of the wind can use it to his advantage. And people who manage to ride the wave can make a lot of money quickly and easily. That’s why people seek to capitalize on trends or even crises, as they can function as a tailwind. Thus, it’s also the art of getting the best results with the least energy possible. However, I think it’s important to note that the ‘easy way’ isn’t always the ‘good way’, when it comes to ethics.

Doing without doing means that we become receptive to nature’s ways, so they can flow through us, and carry us where nature wants us to be. Like drunkards, we become soft, loosen up, let go of our inhibitions, lower our guards, give up resistance, and just let things play out.

Doing without doing requires trust. Trust that, despite our inaction, ‘change’ will happen, as change is nature’s default. And the more we seize to work against it, the more we allow the universe to take care of itself. Or as Lao Tzu stated: “When you arrive at non-action, nothing will be left undone.” 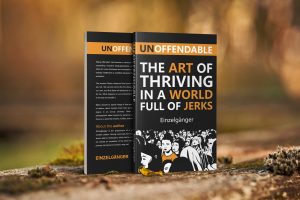