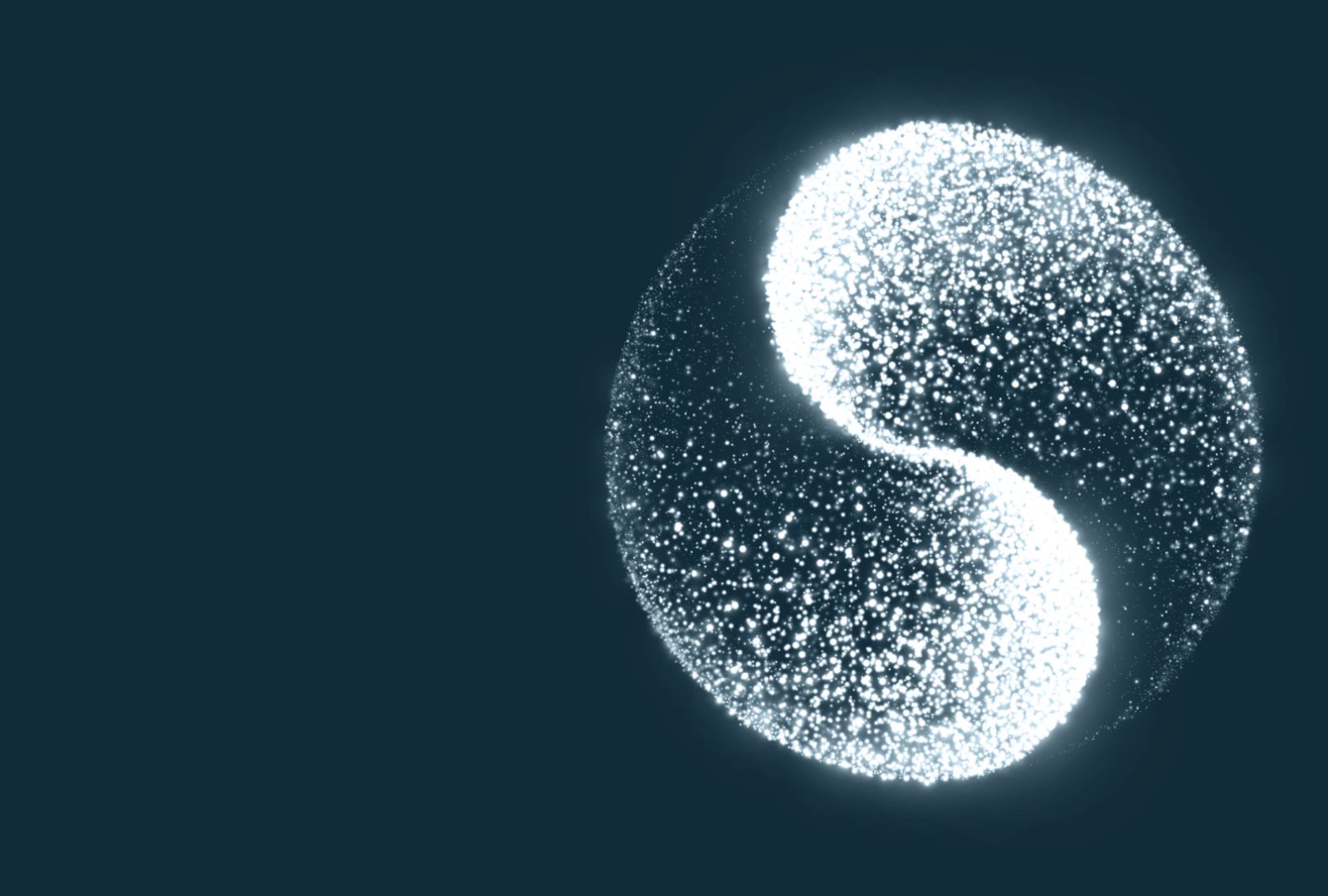 All information whatsoever can be translated into terms of yang and yin.

The concept of Yin & Yang lies at the basis of Taoist philosophy. It makes a lot of appearances in popular and consumer culture, representing things like balance and inner peace. But the profundity of yin and yang goes way beyond that. When we really get this mysterious philosophy, it may change our view on the universe forever.

This video is an attempt to explain the deep meaning of yin & yang.

The idea behind yin and yang is kind of paradoxical. The black and white stand for two opposing forces that are also complementary. This constant mutual attraction and repulsion causes constant change, that manifests in what we call the universe. Phenomena like life and death, winter and summer, matter and emptiness are all physical manifestations of yin and yang.

Yin and yang can be translated as dark-light or negative-positive and is often referred to as masculine versus feminine. Especially in the ancient masterpiece written by Lao Tzu called the Tao Te Ching, we can see that he talks about the feminine, or the great mother, being the mysterious, receptive and passive force represented by the black part of the yin yang symbol, and the masculine, being the active force that is basically most visible and prominent, represented by the white part of the symbol.

Now, this isn’t meant to be sexist.

The word feminine is a way to describe the characteristics of one opposite, while masculine describes the other. Men and women both possess yin and yang characteristics, which was also observed by Swiss psychologist Carl Jung, who spoke about the unconscious masculine side of the woman – the animus – and unconscious feminine side of the man – the anima. Moreover, when we look at the yin and yang symbol, we see a black dot in the white area and a white dot in the black area, representing the idea that both feminine and masculine carry the seed of one another.

Before I’m able to explain this, it’s important to note that there are no absolutes. What’s yin or yang really depends on the situation. Here’s what Lao Tzu wrote in chapter 2 of the Tao Te Ching:

Yin represents a series of characteristics that are – generally – passive, empty, low, cold and dark in nature. Things like passivity and emptiness seem of little value, but they actually harbor an immense power, which I’ll talk about in a minute.

We can describe yang as the active and masculine element, that is – generally – found in things like light, warmth, height, fullness, aggression, and speed.

The yang-aspects of the mug are the material that it’s made off, which is most likely hard and dry material. So, what makes the mug really useful? The answer is its emptiness. Without emptiness, a mug can’t hold any liquids.

If we look at the emptiness in this way, we’ll see that it’s a vital part of everything we do. Without the emptiness of the space around us, we can’t punch or shoot a soccer ball. Without emptiness in sound, we can’t speak, because we need pauses to separate the tones. We can’t enter a room that isn’t empty and without the vast empty space in the universe, our solar system wouldn’t function.

Another aspect of yin is its passivity. Our culture looks down on passivity. It’s all about being proactive, getting results, going from point A to point B, and action over cessation. Because of this, we generally lack respect for the passive element of life.

This is strange when we think about it since passivity is essential for every form of accomplishment. Take strength training for example. Muscles aren’t built in the gym; they’re built-in bed, on the couch, and in any situation in which they don’t work so that the course of nature can rebuild the muscle tissue so they turn out stronger for the next lifting session.

A key characteristic of yin receptiveness. And because of its receptiveness, it attracts. We see this dynamic everywhere in nature, from flowers waiting to be pollinated by insects, to a beautiful woman in a bar who’s waiting for a man to make the first move and even a black hole that just sits there, without actively reaching out, while its gravitational forces attract everything that comes nearby.

Lao Tzu also describes yin as soft, as he compares it to water in relation to hard rock, which is the yang-aspect in relation to the water. The Grand Canyon is proof that water overcomes the hard, without striving.

On the other hand, yin is nowhere without yang. Warmth and light, for example, are necessary for life and emptiness becomes only useful when there’s something built around it. Also, a flower can only be pollinated if insects actively approach it and do what they need to do.

But if we look closer, we see that the masculine aspect within a certain context always carries a feminine aspect and vice versa. The bee, for example, can be considered yang in relation to the flower. But the bee itself, contains yin and yang aspects, like emptiness versus fullness, defensiveness versus offensiveness and passivity versus activity. Even when we look at every component of the bee separately, we’ll find a masculine and feminine aspect, until we reach the level of the atom, in which we encounter a positively charged core surrounded by negatively charged electrons. The yin and yang pattern is the essence of binary code, which solely consists of ‘ones’ and ‘zeros’.

As philosopher Alan Watts puts it:

You could say that all your perceptions, in all their variety and all their color, are made up of a vast composite of little ‘yeses’ and little ‘nos’.

Looking at the complementary nature of yin and yang, we can say that both feminine and masculine keep each other in check. When one becomes too dominant, the other will grow, until it becomes dominant, and then the other side will grow. One of the clearest examples is politics, which goes from left, to right, from conservative to liberal, and so on.

Lao Tzu wrote that no movement is possible if an opposite movement hasn’t occurred before it.

Thus, we could say that everything is a complementary manifestation or, perhaps, a dance between the masculine and the feminine. Yin and yang complement each other, create each other, support each other, regulate each other and transform in each other. The latter we see when a male and female reproduce, and by merging the feminine and masculine, a child is created that, again, consists of innumerable yins and yangs.

Yin and yang are everywhere; in every object, every living organism, every cell, and every single component can be endlessly divided into masculine and feminine.

Non-doing or effortless action, also called wu-wei by the Taoists, is a practice that actually harvests the power of both yin and yang. The trick is ‘knowing’ when to act and when not to, so our actions won’t be strenuous but more in a ‘flow state’. Thus, by embracing yin we become more receptive to the natural course of the universe.

In many cases, there’s no need to act. An over-enthusiastic salesman scares away potential clients, and an overly clingy girlfriend scares away the man she’s in a relationship with. Many problems solve themselves. Furthermore, acting oftentimes only worsens the situation. By backing off we enter a yin state. The key is knowing when to back off and when not to. Too much passivity can be as bad as too little.

No matter what you do, there will always be a dark and light side to everything. Your food only tastes delicious because you’ve tried something disgusting in the past. You’re only pretty because someone else is ugly. You’re only rich because other people are poor. Therefore, you need the disgusting food to enjoy the good food, you need ugly people in order to be pretty and you need to poor to be rich. Because without the opposites, there’s nothing to support your position in the hierarchy.

With the invaluable knowledge that there can’t be one without the other, we might want to be more thankful to that nasty coworker, that guy who cuts us off in traffic, those barbaric people in other countries with different cultures and beliefs and that drug dealer at the corner of the street. Because thanks to them, we can look in the mirror and say: “I’m such a good person”.