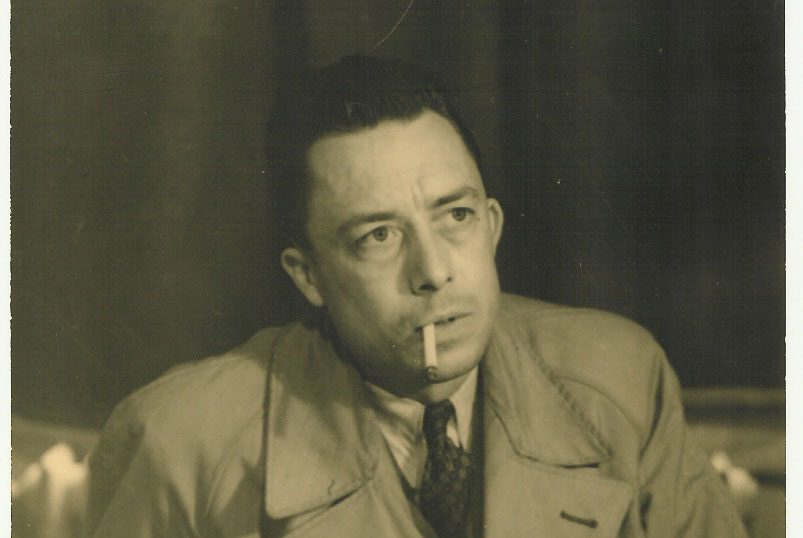 You know, man doesn’t stand forever, his nullification. Once, there will be a reaction, and I see it setting in, you know, when I think of my patients, they all seek their own existence and to assure their existence against that complete atomization into nothingness or into meaninglessness. Man cannot stand a meaningless life.

Why are we thrown into this world? What are we here to do? Could it be that we’re here for no particular reason and that life on Earth is nothing more than a beautiful yet meaningless coincidence? In times of religious decline, mankind is faced with the possibility that its existence is inherently meaningless. For many, this is frightening. The idea that our lives don’t matter, can be difficult to accept.

To give our lives at least some significance, even if it’s just on a terrestrial level, we started to create our own meaning. So, as the humans we are, we began to define what it means to live a meaningful life. What’s worth living for, and what isn’t? What are the requirements? When we have decided what a meaningful life entails, we continue grasping for it in an almost pathological manner. Because if we fail to give our lives meaning, our lives truly don’t matter.

As a consequence, many people feel that their lives are worthless. They wake up, eat, engage in their ‘meaningless’ activities, eat, go to sleep, repeat, repeat, and repeat, as opposed to those ‘lucky few’ who have found meaning in their lives, albeit because of raising children, a so-called ‘meaningful’ job, and other activities that make their existence on this desolate tiny dot surrounded by a suffocating blackness, a bit more bearable.

French-Algerian philosopher Albert Camus saw religion as an attempt to solve the problem of not knowing the meaning of life, by embracing a set of ready-made answers that are attributed to the divine. But by doing so, we hide from reality, as we cover up the existential problem by adopting a narrative that lacks evidence.

In the current age, we see that especially in the West, religion is in decline. More and more people refer to themselves as agnostic or atheistic, and have cast away the belief in God and the Bible. For a philosopher like Camus, it would probably be a good thing when people liberate themselves from dogma, stop blinding themselves to the abyss of the great unknown, and are now free to enjoy life in ways they please.

Imagine that our existence is indeed meaningless, that life on Earth is just a coincidence, and that humanity is nothing more than a cosmic joke without any inherent significance beyond what our senses perceive. What do we do?

Well, the possibilities are endless. We can travel around, enjoy nature, or hang out with friends. In the current age, technology offers us access to the whole world. We can easily learn other languages online, talk to people from other countries, and have a wide choice of entertainment. There’s an almost infinite number of hobbies, things to learn, or things to write and create videos about. In a meaningless universe, we’re free to do anything we want.

But, there’s also a dark side that comes with this development. The rejection of religion, followed by the conclusion that life is meaningless, can lead to an inability to cope with this conclusion.

So, how come that we feel so desperate in the face of such freedom?

The book Existential Psychotherapy, written by Irvin Yalom, distinguishes cosmic meaning and terrestrial meaning. Cosmic meaning concerns itself with the meaning of life and the universe, which, according to Camus, doesn’t exist. So, trying to find it would be absurd. But terrestrial meaning concerns itself with the relationship between ourselves and the world around us. Or, in short, the meaning of our own lives.

With the absence of cosmic meaning, the emphasis is now put on the meaning that we, ourselves, give to our lives. Hence, humans have created several ideas about what’s meaningful and what’s not.

This phenomenon creates problems because we’ve now created a distinction between things that are meaningful and not meaningful. A consequence of this is that we run the risk of failing to lead a meaningful life. And if that happens, chances are that we feel that our existence is pointless and might even consider ending it.

A traditional example of what people consider as meaningful is starting a family and raising children. But these days, especially in Western civilization and in Japan, this can be quite challenging. Relationships and the role of the family are changing. Divorce rates are skyrocketing, marriage rates are plummeting, and dating apps have transformed the way we meet and select potential partners. Japan’s population is in decline. Currently more than half of young adults in the U.S. are single. And around one-third of European households comprise single adults without children. In Sweden, it’s more than half!

The family, something that once was considered sacred, has lost its significance. So, many people now experience the absence of family as a source of meaning, and mourn about this, because what once seemed such an intrinsic part of life, has now become a shattered dream. “What meaning does my life have without children?” one could ask.

But also modern ideas of meaning that could replace the traditional ones can be failed to achieve. In a world where everyone is looking for purpose, so-called ‘meaningful work’, being part of something significant, something special, not attaining these things can lead people to despair. Facing what Carl Jung called “that complete atomization into nothingness or into meaninglessness”, we’re desperately searching for purpose in a chaotic world where traditional ideas of meaning, including religious ones, have faded.

So, the very idea that life must have meaning, and that this meaning is defined by certain characteristics, whether it’s being a parent as opposed to being childless, having a meaningful career as opposed to having a meaningless job, engaging in meaningful activities as opposed to watching Netflix and playing video games, can be a source of great misery! Like with religion, we let others impose their ideas of meaning on us, telling us what to do and how to live, simply because we believe that we can’t live without meaning.

I continue to believe that this world has no ultimate meaning. But I know that something in it has a meaning and that is man, because he is the only creature to insist on having one.

When life is inherently meaningless, which seems to be the case when looking at it from a cosmic point of view and with the knowledge we have, then in what way is what we perceive as meaningful more meaningful than what we perceive as meaningless? The beauty of living in a meaningless universe is that all definitions of meaning are subjective. The search for meaning is, therefore, futile, as we decide ourselves what’s meaningful and what’s not, and, thus, meaning is not to be found elsewhere than in our own imagination. It’s a human experience. It happens in our minds.

When life feels meaningless, it’s probably not because of life itself, but because of the way we define ‘meaning’ in the first place. A tree becomes special if we make it special, and a stone becomes an idol if we attribute that meaning to it. And so, the most simple and mundane things become meaningful if that’s what we decide them to become.

Instead of participating in the ‘rat race of meaning’, we might want to let go of these constructs of what’s meaningful and what isn’t, and begin to decide that for ourselves. Or we could even go one step further, and find meaning in the simple things of life, like taking a walk in the forest, watching a dog playing with a stick, or having a chat with the neighbors.

In the end, the need for a ‘special purpose’ is just another illusion created by our own minds to shield ourselves from the frightening but plausible possibility that our lives are inherently pointless, and that there’s nothing we can do to change that.