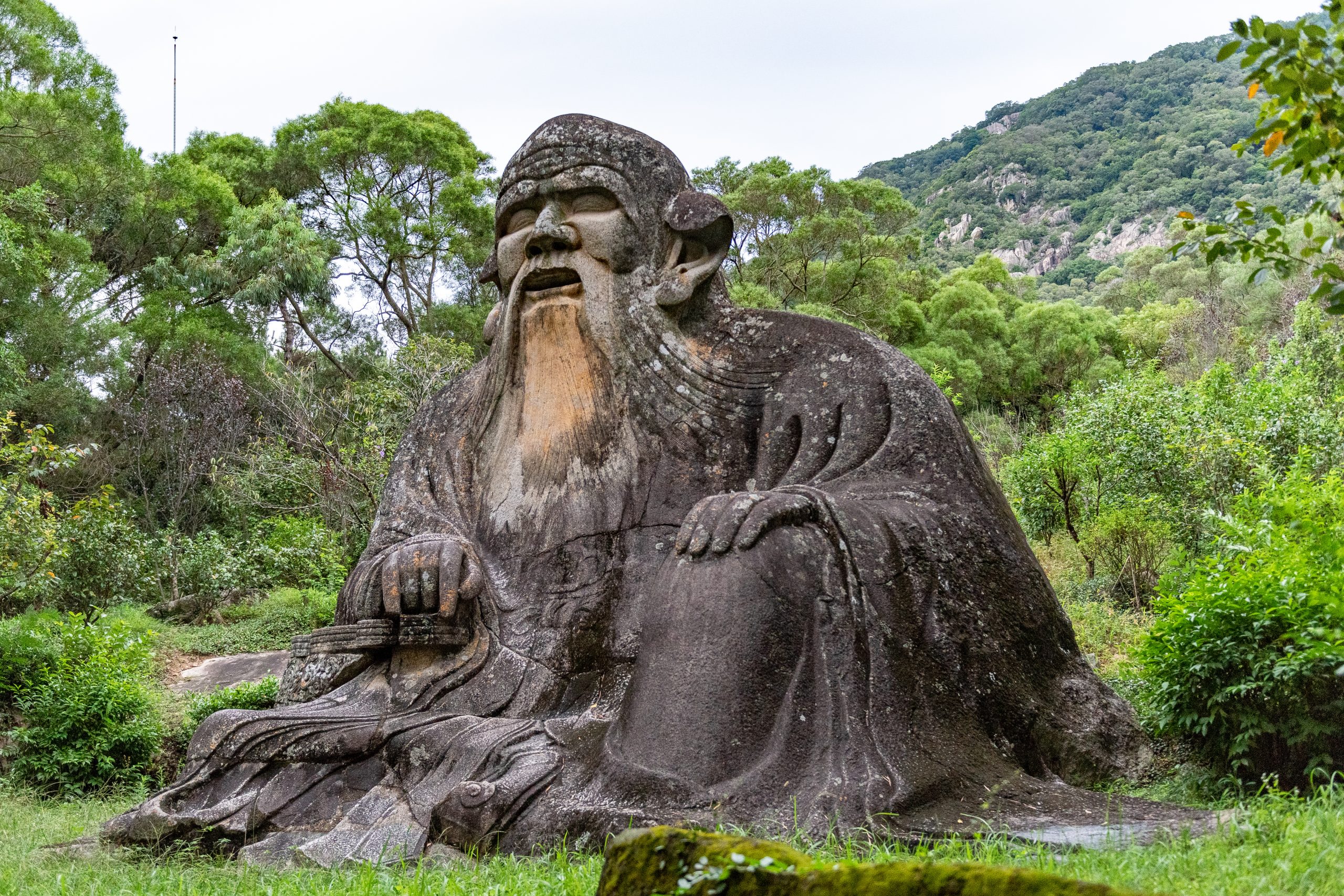 Can you celebrate life and not cling to it? Can you give up control and still get things done? Can you achieve your goals without forcing?

These are all themes we find in the ancient Taoist key work called the Tao Te Ching, which was written by a mysterious sage named Lao Tzu. Not much known about this character of Chinese antiquity, and some historians even doubt that he truly existed. But whoever wrote the Tao Te Ching has inspired millions of people to see the world in a different light. Taoism deeply respects the passive, receptive part of existence, which is generally undervalued. By becoming aware of the strength of, what the Taoists call, the ‘feminine’ or the ‘yin’-aspects of life, we’ll see that effort and force aren’t always the best tools in the toolbox for getting things done.

In a previous video, The Philosophy of Flow, I expand upon the so-called ‘flow state’, known as the soft power of ‘wu wei’ or ‘effortless-action’, also described as being ‘in the zone’ when participating in certain activities like sports and painting. This article (video), however, explores how the wisdom of Lao Tzu can help us go with the flow in a more general sense. How can we let go, and let ourselves be carried along with the river of life? How can we live more effortlessly, with less stress and anxiety? How can we live a rich life and enjoy it to the fullest, with minimal interference of the natural course?

The following five lessons based on the writings of Lao Tzu might inspire you to live life in an entirely different way.

The Master does not force virtue on others, thus she is able to accomplish her task. The ordinary person who uses force, will find that they accomplish nothing.

In several chapters of the Tao Te Ching, Lao Tzu writes about the principle of not forcing. When we force, we go against the natural flow of things, which most likely gets us in trouble. Oftentimes, a fallacy we make is thinking that we can force the unenforceable, believing that when we push hard enough, we’ll eventually get where we want to go. For some things, pushing hard consistently indeed leads to results. But no matter what we do, there are always natural laws that we must take into account.

Lao Tzu observed that nature has its own way of doing things. Living in this world, we see that nature manifests itself in a certain order. Some things are big and heavy, other things are small and light. Some things take ages to grow, other things are born and die on the same day. We humans are bound to the flow of nature as well; the way we grow from infants to adults, the way we learn, the way our bodies function; all is bound to natural laws that we cannot control. If we force things, we put ourselves in a position in which the universe starts to work against us.

When we, somehow, find a way to work with nature, instead of against it, things will get much easier, and we won’t exhaust ourselves so much. This means ‘working smart’, instead of ‘working hard’, by setting our sails correctly and navigating diligently, so that the wind of the universe keeps pushing us forward.

Those who stand on tiptoes do not stand firmly.
Those who rush ahead don’t get very far.
Those who try to outshine others dim their own light.

A typical phenomenon that we see in current civilization is that people are willing to push themselves too far. Pushing boundaries isn’t wrong in itself, as it’s a way to grow. If we look at strength training, for example, it’s actually necessary to overstimulate the muscles. By breaking down the muscles during a lifting session using progressive overload, they’ll come back stronger and bigger overtime. But there’s one necessary ingredient when it comes to this process that many beginning lifters tend to overlook, which is rest.

When we repeatedly overburden the muscles, we will eventually be unable to continue our training, as they don’t get enough time to heal. Even though our intention was making ourselves stronger, we have actually become weaker; chronic exhaustion leads to a lower immune system and also makes us more prone to depression, according to countless studies. So, why do people do this? Well, in most cases it’s because they want to become very muscular, very quickly. But by pushing themselves too hard, they’ve put themselves in a fragile position.

Lao Tzu would describe this as standing on tiptoes, as he argues that when we stand on our tiptoes we don’t stand firmly. There always needs to be a balance between action and inaction; between the effort we put into things and the time we let the body and mind recover. Stretching ourselves beyond our means may get more work done in the short term, sure, but, as Lao Tzu observed, it will make us weak and vulnerable as well.

Another example are people who take out a mortgage that’s just slightly affordable, as long as they keep earning what they earn, working stressful jobs. Yes, this will lead to a big house in the short term, but this situation requires these people to always stay on the hamster wheel, and never go below a certain income. They’re chained to a payment obligation, and cannot afford to take on a job that’s less stressful, if that decreases their income.

And why? Often it’s not because they need it, but rather to show off to other people. And this comes with a price. “The more wealth you possess, the harder it is to protect,” Lao Tzu stated. And when one fills a cup to the brim, it becomes quite difficult to carry it around. So, ideally, if we take Lao Tzu’s wisdom to heart, we want to stand firmly with two feet on the ground with everything we do.

Do you want to rule the world and control it? I don’t think it can ever be done. The world is a sacred vessel and it can not be controlled. You will only make it worse if you try. It may slip through your fingers and disappear.

Have you ever observed that many of our problems solve themselves? Intervening isn’t always necessary. Moreover, in many cases intervention only creates more problems. Everything is in motion, which means that circumstances change all the time, and that today’s problems can become tomorrow’s blessings.

We can see this in the workplace often, as there’s always a certain manager who excessively tries to control all processes, and only causes stress and division within the team. Deadlines aren’t being met, coworkers hate each other, and there’s always drama going on. But when this manager is away for a few weeks, everything seems to go smoothly.

Lao Tzu states that a good leader doesn’t control but operates from the background; she lets people do things themselves and intervenes only sparingly. There’s a difference between delegating and controlling; between leading and imposing. Leading and delegating can be done softly and without much interference, letting things go with the flow. Controlling and imposing often go together with force.

In practice, we might want to take a step back a bit more often before we intervene. In many cases, the natural course will make things work out just fine. This basically comes down to trusting the universe, so that we can let go of control.

Those who know they have enough are truly wealthy.

As we tend to overburden ourselves, we also have this nasty feature of gathering much more than we need. We see that the wealthy try to get wealthier. For them, increasing their possessions is life. But when we always aim for getting more, don’t we forget to live?

Our needs come with natural limits. We only need enough food to stay energized during the day, and we only need enough water to stay hydrated. Too much is harmful. Taoist sage Zhuangzi invigorates this argument, by telling us about the mouse that only takes a bellyful of water when drinking at the pond. A mouse naturally refrains from over-encumbering itself, as drinking too much will take its toll on the body.

Nevertheless, humans often accumulate more than they need. The main reason for this seems to be fear: the fear that ‘not having all this stuff’ diminishes who they are. It’s an ego thing: having more, means “I am more”. We also fear that we won’t have enough in the future. But as we know; the future is uncertain. We can die tomorrow, and everything we own can be taken away from us in an instant.

“Whoever knows contentment will be at peace forever,” Lao Tzu states. But we can only know when we have enough if we realize that the value we attribute to external things is based on delusion. We aren’t what we have, as none of these possessions are within our control. This includes even our own bodies. Having an excess of external things eventually becomes a burden. “The things you own end up owning you.”

As with the mouse, there’s only so much we can take. Of course, it’s not a bad idea to have, for example, a nice house and money in the bank, as long as we don’t become slaves to what we own. Moderation is the key.

I have heard that those who celebrate life walk safely among the wild animals. When they go into battle, they remain unharmed.

There’s a difference between celebrating life, and clinging to life. If you cling to life there’s nothing to celebrate. Life has become immensely serious and even painful. We’re anxious because we see death, the mother of all fears, in every corner. The fear of death is what makes us cling to life, and how Lao Tzu puts it: “Those who are stiff and rigid are the disciples of death. Those who are soft and yielding are the disciples of life.” Those who don’t cling to life, therefore, aren’t a threat, because they aren’t fearful, and wild animals don’t see the need to attack them.

Now, the fear of death manifests within us in ways that are very subtle. Many people claim that they don’t fear death, because they don’t fear this imagined idea of what death is. But this mere idea rarely resembles truth, as we cannot possibly imagine what it is ‘not to be’.

Now, an aging body, a bad reputation, or poverty, do not equal death, as we can still live, and live well, while enduring these things. However, it may equal the death of our self-image; the story we tell about ourselves. For most people, this is where the fear of death really lies, and this is what they cling to. Thus, the true fear of death lies in the idea of ‘losing who we think we are’. That’s why in war, soldiers fear the idea of ‘not dying in honor’ more than dying itself. But by clinging to the idea of ourselves and the world around us, we deny the nature of the universe, which is that change is the only constant. The story we tell ourselves about ourselves today will lose its accuracy tomorrow. The same goes for the story we tell ourselves about the world.

When we cling to one thing, we resist another. And what we resist will stick, but what we accept we move beyond. The ability to let go and go with the flow, and to be a flexible operator in a chaotic universe, is what makes us disciples of life.

And these were five lessons based on the writings of Taoist sage Lao Tzu.