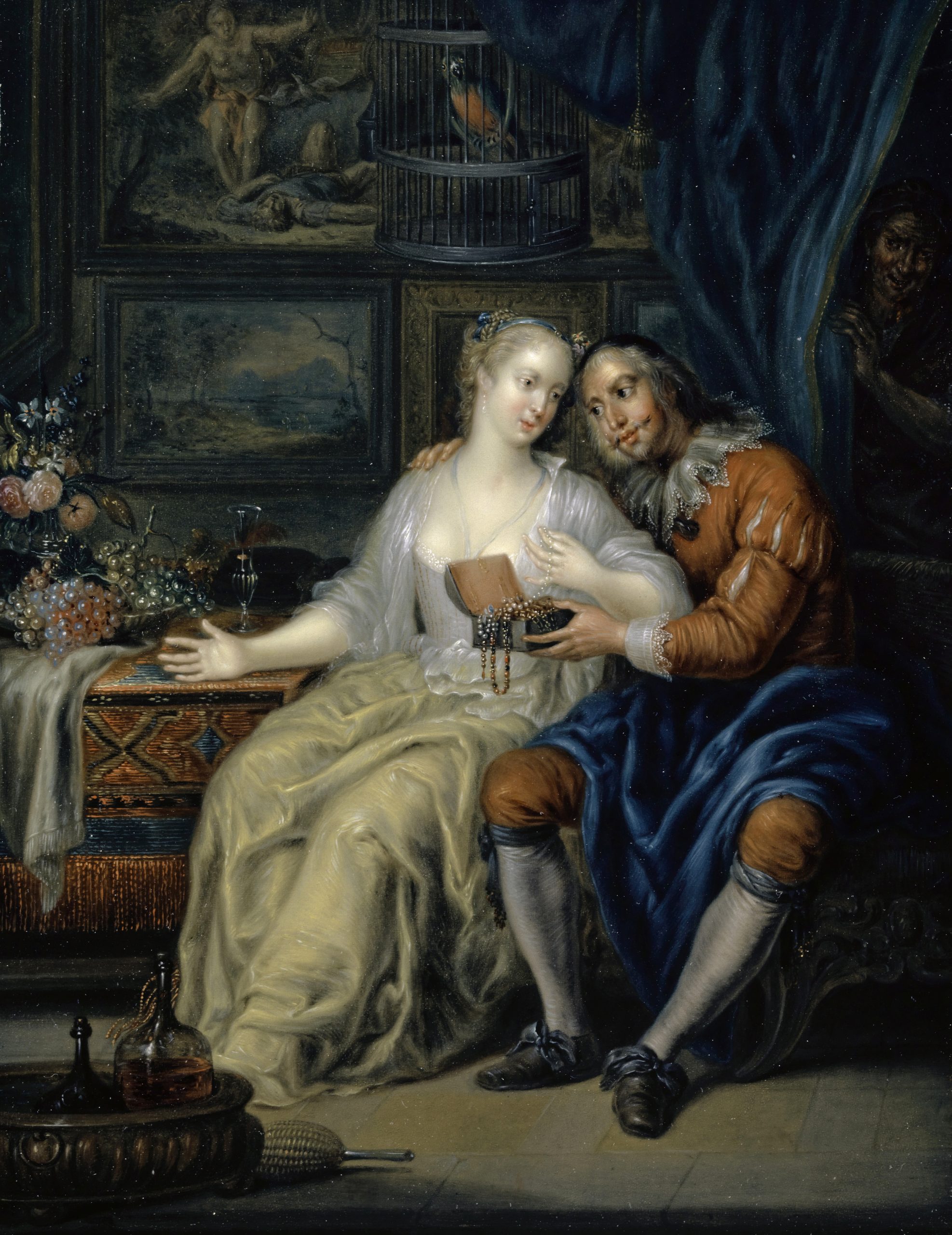 Love is all you need. But what is it exactly? The contemporary concept of love revolves around the experience of blissful infatuation with another person. In most cases, it’s a bond between two people that includes physical attraction. The way we practise love has been changing over the years. For example: originating from the French amour courtois, or ‘courtly love,’ the phenomenon of medieval knights seeking to impress ladies of nobility by performing various services, like going to battle, courting a woman heroically to gain her approval has been the norm for many years.

However, we have seen this behavior declining overtime, as social and gender roles have been changing. In the last decades, we can observe a radical shift from the common practice of marriage (and often arranged marriage), to more casual dating and even the hookup-culture fueled by technological advancements in the form of dating apps that let us find love in an unprecedentedly superficial way: based on a few pictures, lines of text, and emojis.

And even though the sacredness of marriage has been eroded, long-term commitments between two people based on trust and responsibility have been largely replaced by serial monogamy, people still seem to crave love. But what kind of love do we actually want? Is it sex? Is it the experience of deeply connecting with someone? Is it perhaps the opportunity to take care of another human being?

To answer this question, we first need to know what love is. This piece is a humble introduction to love, that not only explores different kinds of love, but also the blessings and pitfalls of chasing them.

So, what is love? Love has been a source of debate probably since the dawn of time. It’s a phenomenon that’s present in all humans, in one way or another. Some of us are more inclined towards platonic love, in which we rather share ideas and personal experiences with someone we appreciate, while, for many others, the very meaning of love is the passionate expression through the body; for them, things like cuddling, kissing, and rubbing bodies against each other while stimulating the sexual organs, is what love entails.

We could say “I love you” to a friend in a drunken stupor, which probably means something entirely different than saying “I love you” to a spouse. With friends and blood relatives, love is mainly expressed by caring for each other through words and actions that are non-sexual, but with so-called lovers, sexual attraction suddenly plays a role. We could also say “I love this song” or “I love today’s weather”. But this love is neither platonic nor sexual. This wide variety of using the word ‘love’, therefore, is kind of confusing. So, what is it?

The ancient Greeks created several concepts for what we’d call love. This video focuses on the three main ones, called philia, eros, and agape, that pretty well encapsulate the forms of love we see today. Philia is a word that in the English language serves as a suffix, often in words that indicate sexual attraction to people, or even animals and things. But the ancient Greek meaning of philia points to a dispassionate virtuous love, that we experience as loyalty to friends or family, or the enjoyment we can have in certain activities, like soccer, and also the love one can have for one’s country or religious community, and for one’s pet.

The ancient Greek philosopher Aristotle, who developed the idea of philia, describes the bonds of philia as generally symmetrical and mutually beneficial, even though there are exceptions like the relationship between father and son. Philia, thus, occurs in many different contexts but is based on a desire to benefit another, for the sake of the person, activity, group, or animal that we have affection for. So there’s a selfless element in philia, as it’s not just based on what we can get, but on what we can give, even though it has certain conditions like affection or shared activities.

There can be a degree of philia in modern love relationships, if we cultivate a friendship between ourselves and a lover, and that the enjoyment of being with each other goes beyond what we do between the sheets, and takes each others’ well-being into account. This brings us to the next concept: eros.

Eros, as this word already suggests, refers to the passionate element of love, that’s commonly present when we fall head over heels with someone. You know, that state of madness we stumble into after we’ve got pierced by Cupid’s love darts, and causes us to be enraptured with a particular person. This form of love seems to be prevalent in today’s culture, in which love is mainly associated with lust and infatuation. This seems especially true when it comes to dating apps, that give us the opportunity to select each other based on pictures, which kind of implies that, above all, we’re just looking for an attractive body to satisfy our sexual desires.

Eros is highly energetic. In some cases, it’s strong enough to fuel someone’s life and purpose for many years, which was the case with Danish philosopher Søren Kierkegaard, whose unrequited love for Regine Olsen remained a driving force for his work. The philosopher Plato argued that eros doesn’t necessarily have to include physical attraction. One could also be passionate about philosophy, for example, thus we can direct the energy of eros into much more sophisticated things than copulation. Carl Jung similarly identified the libido as the totality of psychic energy, not limited to sexual desire.

Lastly, what’s often considered the highest form of love is what the ancient Greeks called agape. The Christians describe agape as the love that God has for humanity; love that’s enduring, based on acceptance, and without conditions. Agape focuses on the needs of others. But as opposed to philia and eros, this love doesn’t have to be answered to be fulfilled. Thus agape is ultimately selfless, a bit like what the Buddhists call ‘metta’ or ‘loving-kindness’, which is a universal love that transcends all circumstances.

In many ways, agape is sacrificial, meaning that we’re willing to sacrifice ourselves for the wellbeing of others. The crucifixion of Jesus Christ is one of the most telling examples of this. Devoting our lives to the community without asking anything in return, and engaging in charity are forms of agape. It’s not something we fall into, as it’s the case with eros, but it’s something we rise in.

Love, in essence, is an experience of connection. This connection could be to friends, family, partners, but also to ideas, or to sensual experiences like the love of music and food. Or it could be a more universal connection that we feel with all sentient beings. Each form of love has its blessings and caveats. Falling head over heels in love with someone, for example, is considered one of the most euphoric experiences one can have. However along with a high always comes a low, meaning that eros is able to cause as much pain as pleasure.

The nature of eros in regard to relationships is also selfish, as it’s about satisfying a thirst for someone else; using this person for the sake of answering our own intense desires. And, of course, when this person disappears, or in any way denies us the pleasure we want so badly, our affection can turn into agony within a split second. With philia we can see this to a much lesser degree. But even though there are selfless elements in philia, it’s still based on certain conditions. As with friendship, we can lose our friends by, for example, betrayal or death, or simply by a change of interest. But philia is much less passionate than eros, and won’t make us fall madly in love, meaning that it’s a safer and more stable form of love.

Ancient Greek philosopher Epicurus was a big fan of philia, as he saw friendship as one of the necessary elements for a happy life. Romantic love, on the other hand, he saw as a disturbance of a peaceful mind, so he avoided it. The tumultuous nature of romance is in sharp contrast with agape. The blessing of agape is the absence of attachments; as this love is unconditional, and totally independent as well as accepting of the actions of others. This means that we can love while staying as serene as a graven image.

However, the flipside of this form of love would be the total absence of passion and sexuality, which is a kind of weird thing to contemplate in today’s world. Such love would be seen as incredibly boring, regardless of its potential for tranquil and long lasting joy and benefiting humanity, as opposed to the overwhelming emotional extremes of selfish passionate love. But as we collectively celebrate the latter, as we see this reflected in countless movies, television shows, books, and even video games that portray this form of love as an ultimate concern, most people seem to chase that short but intense roller coaster ride of romance, regardless of the costs.

Some would argue that these different kinds of love aren’t mutually exclusive, and that with the right balance we’re able to enjoy the aspects of every one of them. Moreover, as the euphoria of romance subsides eventually, the only reliable way of maintaining a long term relationship with a partner is through ongoing care, friendship, responsibility, sacrifice, and the willingness to accept each other’s flaws.