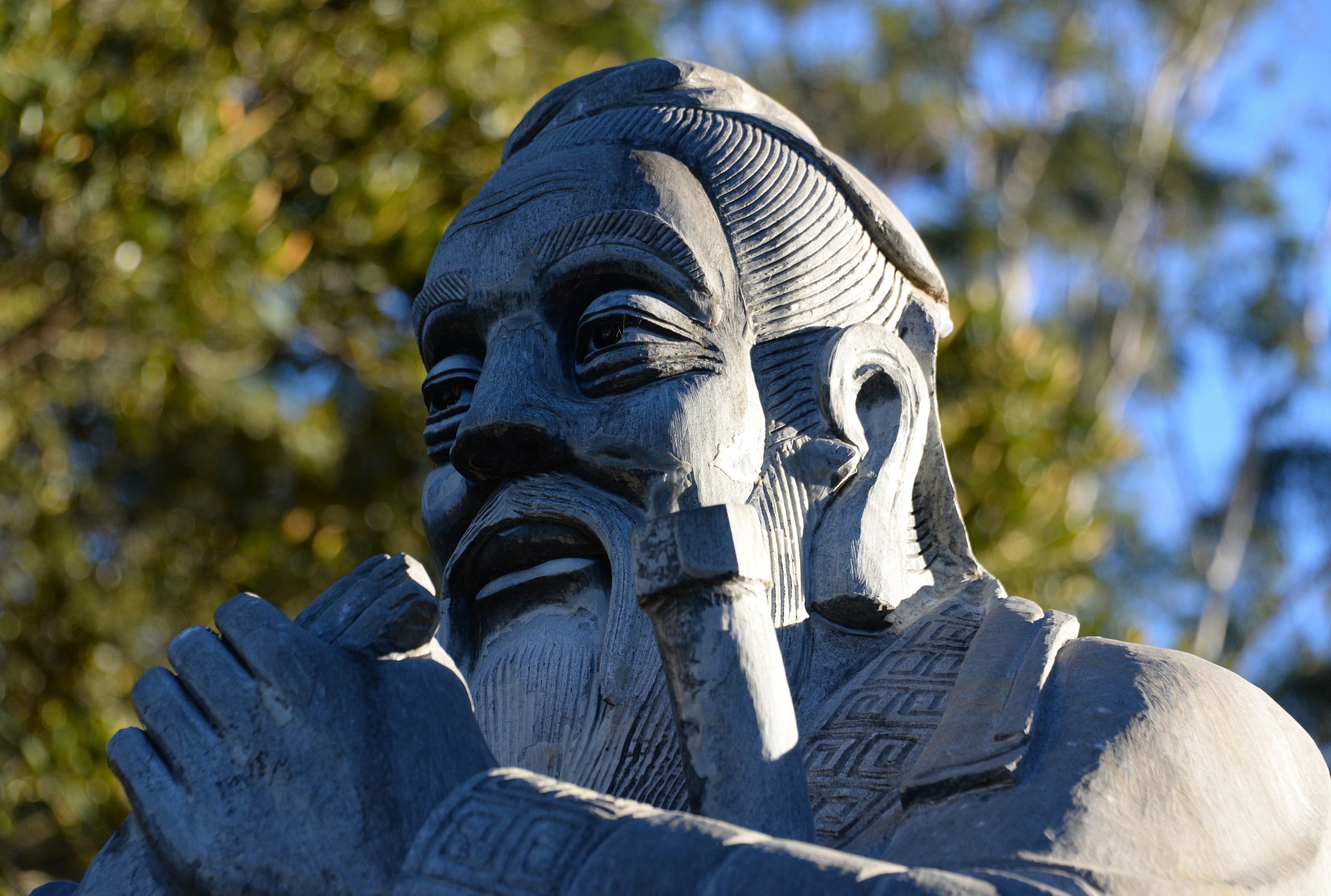 Isn’t it the case we should always stay true to ourselves? Which means that we ought to know who we are, and organize our lives in ways that are compatible with our personalities? When we look for a partner, for example, we look for someone that we’re compatible with, and in regards to education and work, we need to do something that fits our characteristics. However, not knowing who we are, seems to be a problem. But luckily, this problem can be solved by taking a personality test, by talking to a counselor, or perhaps by going on a long solo trip around the world to (quote on quote) “find ourselves”. Because, after all, our true selves lie somewhere hidden deep within.

Well, according to Michael Puett, Harvard professor of Chinese History and author of the book The Path, this way of thinking is extremely limited and even dangerous when it comes to how we live our lives. In Chinese philosophy, there’s no fixed ‘self’ the way we see it in the Western world. Who we are, and what we could become is much more tangible, than a fixed set of characteristics that define a personality. This Eastern ‘self’ is always evolving, changing, losing, and gaining, and isn’t so much defined by what’s within, but by what we do. So, it cannot be found, but it can be cultivated.

Self-cultivation is a psychological process that’s part of the ancient Chinese system of thought called Confucianism. Its founder, Confucius, firmly believed in the power of ritual, and how it can make our lives better. The word ‘ritual’ may sound a little bit old-fashioned, and intended for either religious people or those who are indoctrinated by some kind of ideology. But the power of ritual is vastly underestimated.

Confucius realized that rituals and ceremonies are actually forms of social cement. Their transformative nature not only shapes societies; it also shapes ourselves. Therefore, engaging in certain behaviors in a disciplined manner – simple things like morning rituals, habits, exercises – can bring about incredible change, way beyond our limiting beliefs that unfortunately dictate the lives of many. This piece explores the art of becoming better, based on the teachings of Confucius.

Confucius was a philosopher and politician in ancient China, born in the 6th century BC in the vassal state of Lu. Because of his dissatisfaction with the ruling aristocrats, he created a way of life and governance that later became known as Confucianism. The Confucian teachings would later determine the lives of millions of people and are still more than relevant in modern-day China.

Confucius emphasized morality, order, and respect, and is geared toward social harmony, which can be achieved through traditions, ceremonies, and, of course, rituals. Here, we see a fundamental difference between Confucianism and its counterpart Taoism. Taoist sage Zhuangzi, for example, pleaded against these artificial ways of living, that will only disturb the natural course of things.

A Taoist embraces our natural state and approaches life conformable to the flow of nature, with minimal interference. A Confucianist, however, acknowledges our inborn natural state, but sees us, humans, as diamonds in the rough; as agents of great potential. Because through practice and training, we can become better, more skilled at life, more integrated, more virtuous. Self-cultivation is about enhancing and perfecting how we act, and relate to each other, which can bring about tremendous positive change on a personal as well as a communal level.

With the help of personality tests, counselors, and self-help books we seem to have totally figured out ‘who we are’. Some people even fetishize their newly-found personality type as they fully identify themselves with it, to a point that they cling to it. Unfortunately, this enchains them to a very limited view of who they are. Michael Puett is very clear about one aspect of modern Western civilization. He stated that the way we think about the self is wrong. As opposed to existing beliefs, the Chinese view the self as a fragmented non-fixed phenomenon. It’s not something we can find if we go within. Instead, Puett describes the self as a mess.

Thus, we’re all a bunch of messes, meaning, that what we perceive as the ‘self’ is a gathering of decentralized manifestations like emotions, thoughts, and many other sensations. We could compare it to a Buddhist concept called anatta, which means “no self”. Being a mess may seem like a bad thing, but it’s actually very liberating. Usually, people believe that who they are is, more or less, unchangeable. “This is just who I am,” one could say when reflecting on the fact that he or she is easily angry. Having a short fuse, in this case, is seen as part of a personality or, in some cases, as part of culture.

But this view is very limited. It’s even potentially dangerous to believe that certain behavioral patterns cannot be changed, as we keep finding ourselves in the same destructive situations over and over again, like abusive relationships, substance abuse, or criminal activities that land us in prison. Why? Because we believe that we can’t change things for the better. In the age of individualism, we might think that we’re free because we refuse to follow conventions, distance ourselves from collectivism, and don’t engage in these ridiculous old-fashioned ritual practices. No, we’re liberated. We’re free to be our authentic selves.

But the danger of taking such a stance is that we become rigid in regards to who we are. We might find ourselves becoming eccentric to such a degree that the world becomes alien, and even hostile to us, and vice versa. And we might forget that, for a great part, this condition is a choice – not a condemnation.

What we think we are is always changing, evolving, reacting to outside circumstances. This makes us far more malleable than we think. Self-cultivation is the art of using this malleability to our advantage, so we stop focusing on who we are, but instead, on what we can become.

Now, how does this work?

Self-cultivation can be used to enhance and perfect ourselves in ways that improve our quality of life. In Confucianism, we basically ought to cultivate ourselves into better people in regards to virtue. But the essence of ‘cultivation’ can work into any direction, meaning that we can also cultivate bad habits. But let’s assume that we all have the same goal: a state of flourishing. In that case, context is important. It requires a sensitivity for which behaviors optimally fit certain circumstances. Eventually, we might find out that our current behavior is getting us nowhere. So, we decide to change it. We decide to become better. But how?

Well, it’s essential to realize that we’re basically a bundle of patterns. Oftentimes, we aren’t even aware of these patterns and how they keep us from looking beyond our possibilities. As Puett stated: “Our habits limit what we can see, access, sense, and know.” So it’s almost impossible to change unless we apply the cure… ritual.

The power of ritual

Now, what characterizes rituals is that we momentarily break with the mundane, or, with our “normal” state. We experience an immediate interruption of our existing patterns and adopt new ones, even if it’s just for a brief moment. However, as Confucius realized, engaging in these rituals periodically will result in long-term changes over time. Let’s take a look at the Remembrance of the Dead, for example, which is a Dutch ritual held annually on the 4th of May. The goal of this ritual is to commemorate all civilians and members of the armed forces of the Kingdom of the Netherlands, who’ve died in wars or peacekeeping missions since the beginning of the Second World War.

During this civil ritual, not only Dam Square in Amsterdam, but also Dutch living rooms, public spaces, cars, restaurants, shops, and work environments transform into momentary ritual spaces. The heart of the ceremony is two minutes of silence, which is then followed by the national anthem. For participants, this ritual breaks with their everyday lives. By taking part in it, we temporarily let go of our usual behavior and take on a role: that of a Dutch citizen, who’s deeply connected with a collective past, and to Dutch identity with all its values and beliefs, like liberty and tolerance.

Now, this is where the magic happens: according to annual research this ritual as a whole, and the emotions and thoughts that are involved, evokes feelings of solidarity and connectedness. It basically helps to keep the Dutch, Dutch. So, for a community, a ritual not only functions as social cement; it also changes its members psychologically. Confucius realized this more than 2,500 years ago. Hence, his teachings emphasize the importance of ritual. But how can we use this mechanism to better ourselves; especially when we don’t live in a ritualistic community?

In an individualistic society, existing conventions can be ritualized. Drinking our morning tea, or having a short chat with the cashier of our local supermarket every Saturday morning can be rituals. For self-cultivation, we need rituals that are transformative, meaning that they break existing patterns, again and again, which brings about gradual change. Let’s say, you’re considered a negative, cynical person. If you’d engage in any conversation, you’ll most likely come across as ‘bitter’. Chances are that people don’t like to converse with you for that reason, which leads to loneliness and resentment.

Now, you could say stubbornly: “Well, this is who I am. I’m authentic. People should accept me for who I am.” However, the issue with this attitude is that, according to the Chinese view, this is not who you inherently are. You can change by breaking these patterns through self-cultivation. This means that you need to perform rituals that create what Puett calls “as if” moments, in which we purposefully act differently. This is also known as “fake-it-till-you-make-it”.

Instead of being authentically miserable, we could repeatedly and consequently be inauthentically joyful. Over time, we’ll discover that being joyous becomes a characteristic. The same goes with talking to people we find attractive. We may identify as ‘shy’, but when we decide to act confidently – as if we are temporary ‘a different person’ – this behavior will eventually become habitual.

So, isn’t that liberating? Instead of being enchained by a certain personality, we are able to change ourselves by changing our behaviors. Fears can be overcome, a-holes can become pleasant and kind, and destructive relationships can turn into flourishing beacons of joy. Of course, self-cultivation takes work. Life is like playing a musical instrument; if we keep practicing, we become better at it. But if we stop, our skills will deteriorate. So we need to continually finetune and change our patterns for the better.

So, at the end of the day, what self-cultivation comes down to is this: be the change that you want to see. In this case: in yourself.