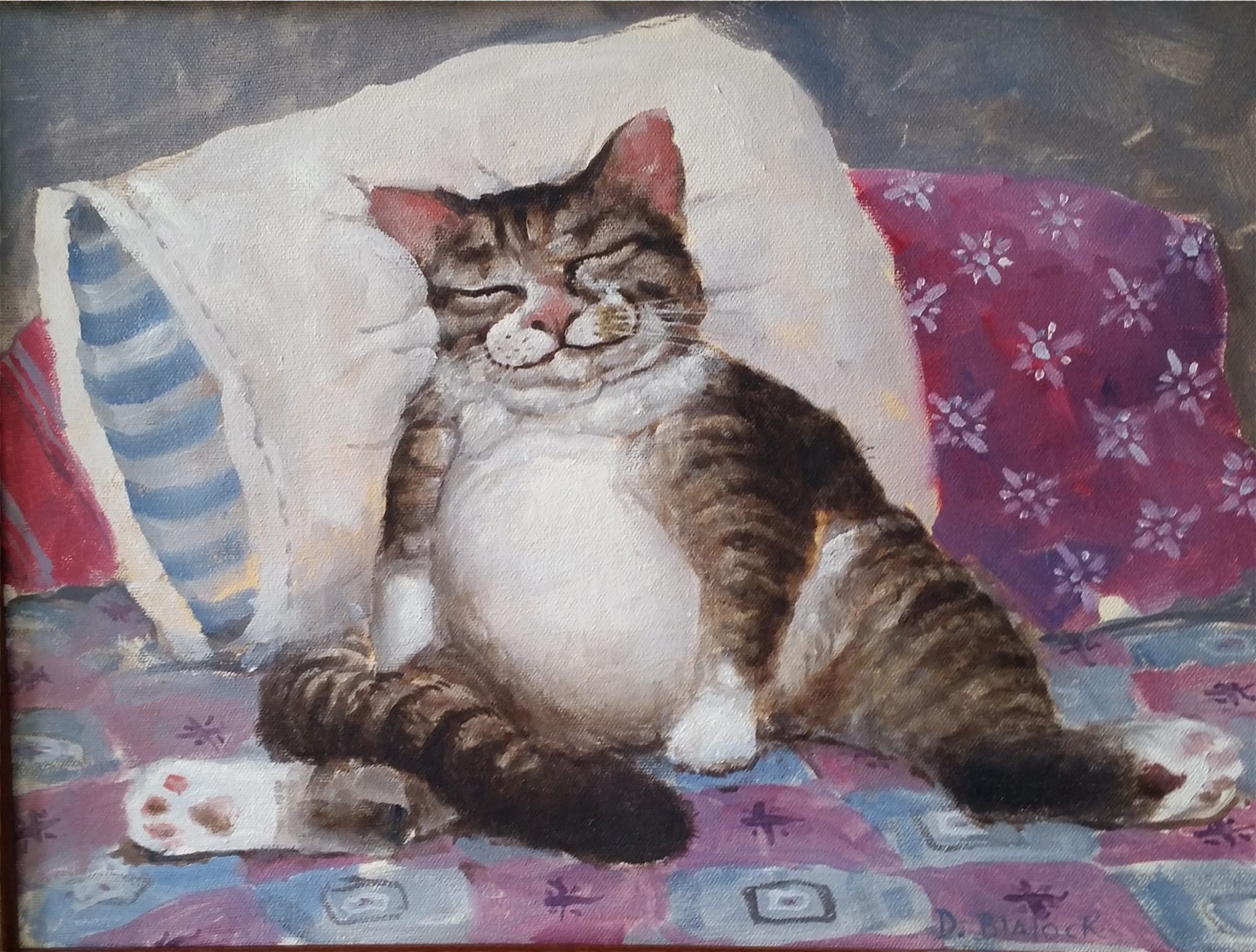 Most of us would agree that cats and humans are vastly different. We tend to think of ourselves as more developed, as a higher species, not just because of our superior intelligence but also because we gave ourselves the gift of morality and ethics. Unlike cats, we know about what’s good and evil, right and wrong, and we aspire to transcend our animalistic tendencies to improve morally and make the world a better place. Cats, on the other hand, don’t care about morals. They don’t have ambitions to improve the world either, nor themselves.

Most of the time, cats come across as utterly indifferent. They don’t seem to care about other cats and aren’t too attached to their owners. But does this mean that cats are immoral, heartless creatures? Are cats, from a philosophical viewpoint, devoid of ethics and virtue? According to philosopher John Gray, author of the book Feline Philosophy, Cats and the Meaning of Life, cats have ethics and are also capable of love and affection.

Even if cats indeed have an indifferent, careless demeanor; they do care deeply about some things but mainly if it suits them. In contrast to humans, cats don’t have religions, moral philosophies, or any other external system that provides them with ethics or rules to live. And they don’t need such things to live a fully-fledged feline life. A cat’s ethics (or philosophy, if you will) come from within, as it already knows how to live. So, we could see a cat’s philosophy as an antiphilosophy, as it challenges traditional philosophy and offers a more primal (or perhaps more feline) approach to life instead.

The book ‘Feline Philosophy, Cats and the Meaning of Life’ explains feline philosophy using John Gray’s interesting insights supplemented with theories and views by other philosophers like Arthur Schopenhauer, Michel de Montaigne, and Plato. Based on my interpretations of Gray’s ideas, this piece explores what we can learn from cats.

Gray’s explanation of a cat’s philosophy begins with a story about a philosopher who assured him that he had convinced his cat to become a vegetarian. Gray thought the philosopher was joking, but that wasn’t the case. The philosopher seriously believed that his cat had chosen a meatless diet. It turned out that the cat ate vegetarian at home but had been supplementing his diet by catching animals like mice and birds.

The cat wasn’t interested in his owner’s moral idea of eliminating meat from the menu for the sake of other animals. Cats are hypercarnivores by nature, meaning that their bodies need meat to thrive: a vegetarian diet may be acceptable for omnivores like humans, it’s not suitable for cats. Nevertheless, the cat wasn’t offended by his owner’s attempt to push a vegetarian diet. He just accepted the situation, went his own way, and remained faithful to his inborn nature.

The philosopher’s intention to impose human morality onto his cat was pretty questionable. Cats don’t need morals to live. They already know what they need and how to live their lives. Moreover, cats, unlike humans, are happy, relaxed, and content by default and don’t need moral advice from a species that’s perpetually restless and unhappy. And so, Gray concluded that the philosopher could learn something from the cat and not the other way around.

Cats are fine being cats.

Humans seem generally dissatisfied with their nature, and they’re on a continual quest to be something they’re not, sometimes to absurd levels. They also suffer from continual existential angst. Hence, they cling to philosophy and religion, hoping to answer their many questions and retrieve a sense of meaning. They need morals (or rules) to determine what’s good and evil, how to improve, how not to be bad people. Gray’s stance on morality is atheist, which is that most (if not all) of these rules are essentially products of people’s imagination. So, none of our morals are inherently true, as they’re value judgments. What’s moral for one person is immoral for another. And like clothing styles, morals go in and out of fashion, so what’s moral today may be immoral a decade from now.

Gray wrote that people who claim they’re moral simply express their emotions and how they feel about things and use facts, from time to time, to support their value judgments. People are nevertheless willing to impose their often irrational morality on others, defend it with violence, prosecute those who don’t conform, and silence those who disagree.

Cats, on the other hand, seem perfectly fine with being cats. And unless their safety or comfort is threatened, they’re content with the world around them. They don’t feel the need to change what they are, nor do they need rules that tell them how to live. And even if they encounter those silly people that feel the need to change everything they can about themselves, each other, and the rest of the world, they just acceptingly ignore them and walk away. Cats simply do what’s suitable for cats, disregarding artificial moral philosophies, religious doctrines, and ideologies.

But according to Gray, cats are not immoral. Their ethics come from a natural, inborn origin, not from ideas. For example, cats can be extremely brave and excellent providers and protectors of their young. But they don’t do it for praise and approval from other cats or their owners, for that matter. Cats are brave because it’s in the best interests of their young, which they care for deeply. In other cases, they decide to run away from a situation simply because, for survival purposes, that’s the best course of action. They don’t beat themselves up for being cowardly afterward, either.

This natural, pure philosophy of cats relieves them from a great burden: which is that they don’t ruminate and worry about what’s good and evil, moral and immoral, what they should and shouldn’t have done, and what other cats might think of them. They just do as their nature inclines them to do. And thus, cats are overall much more tranquil and carefree than us humans, who are generally tormented by all kinds of discursive thoughts and ideas, sometimes to the point of complete madness.

Unlike many other animals, cats were never truly domesticated by humans. Dogs, for example, have partly become humans, according to Gray. And, like cows and horses, many dogs have learned to serve us by performing tasks. Cats are not like that. Their hunting skills can be helpful, but they don’t hunt on command.

Around 12,000 years ago, cats started living together with people in farming communities in the Near East, now situated in Turkey, Iraq, and Israel. Humans quickly saw the usefulness of cats as they hunted rodents and other animals that affected their grain storages. Therefore, humans put cats on farms and ships, so they traveled along and conquered the rest of the world.

It’s cats who benefit the most from their relationship with humans. To this day, humans have served as steady food supplies and offered them shelter. Cats can be useful to humans (to some degree), but they mainly just like their company. At the same time, cats don’t need us. They don’t perceive themselves as the property of those who care for them. They can be very fond of their human companions but don’t cling to them. If they like to be with us, they stay; otherwise, they leave. If people give them food, they’ll take it. But if people stop giving them food, they’ll start hunting again. So, as Gray concluded, cats domesticated humans by teaching them to love them.

Cats aren’t group species but highly individualistic. They cooperate when necessary but generally operate alone. As opposed to humans, they don’t care about group identity or a sense of belonging. They don’t need to feel accepted and certainly don’t care about what other cats think of them. Also, cats can be alone easily, unlike most humans who cannot bear their own company, and continually look for all kinds of diversions to cope with their innate restlessness and to walk away from the reality of life: pain, death, and loss. Cat’s don’t need to run from themselves. They’re OK with how things are.

So, how come cats, unlike humans, are so happy and content? According to Gray, the secret of feline happiness is that they don’t tell their lives as stories. Cats are not self-conscious and don’t find meaning in constructing a story about their lives. Humans, on the other hand, seem obsessed with stories. They tend to either create or look for narratives that explain their existence and the world around them. The stories they tell themselves are often fragile, so they need continual confirmation. Therefore, they turn to religion and philosophy for less fragile, more secure stories.

There’s nothing more detrimental to our happiness than a broken, tragic story, which, unfortunately, most of us have plenty. Hence, the default human condition is one of misery. We’re constantly ruminating, worrying, dissatisfied with what is, and looking to escape it. The default condition of cats, on the other hand, is happiness. Even though cats can meet with great adversities, these impact them differently, as they don’t create stories or a ‘history’ out of them, nor do they construct a possible future. History and the future hardly concern them, and they don’t dwell on concepts like death and disease. They eat and sleep when they feel the need and defend themselves and their young if they have to, but don’t spend their time worrying about these things. Yet, despite the inability to create stories, cats are a very successful species that has spread worldwide and thrives to this day.

Rules for Life (from cats)

What can cats teach us about happiness? First of all, we shouldn’t try to become cats, according to Gray. We are human, and we can’t change that. It’s our nature to create stories and be discontent with how things are. There will probably always be some form of religion, and we’ll always be interested in philosophy.

If cats could grasp our philosophical ideas, they probably wouldn’t take them too seriously but play with them as they would play with a ball of wool. After all, philosophy is obsolete to them, but it could be amusing. According to Gray, if cats could teach us something about happiness, they wouldn’t give us a set of commandments we must follow, like Jordan Peterson’s 12 Rules for Life for example. Instead, they’d offer us their wisdom playfully, without obligation, and wouldn’t expect us to follow it. Gray presents us with ten tips for life derived from his lifelong experiences with cats. Let’s look at three of them, the other seven you’ll find in his book. These are translated from Dutch, by the way.

Gray states that trying to convince people to behave rationally is like trying to make cats vegan: in all likelihood, it’s not going to happen. Most people are driven by emotions and use rationality mainly to support what they believe in and not to determine if what they believe is true. If you’re bothered by human irrationality, be like a cat and just walk away.

According to Gray, there’s a risk that our misery becomes our meaning. The problem with this is that our whole lives revolve around our misery, which isn’t a nice way to live. A cat would say: don’t get attached to suffering and avoid those who are.

According to Gray, we’ll not find happiness by chasing it because we don’t know what makes us happy. The cat’s way to be happy is just doing something that we find interesting: this will make us happy without knowing anything about happiness. Cat’s don’t know about the concept of happiness or what it means to be happy. They just are.