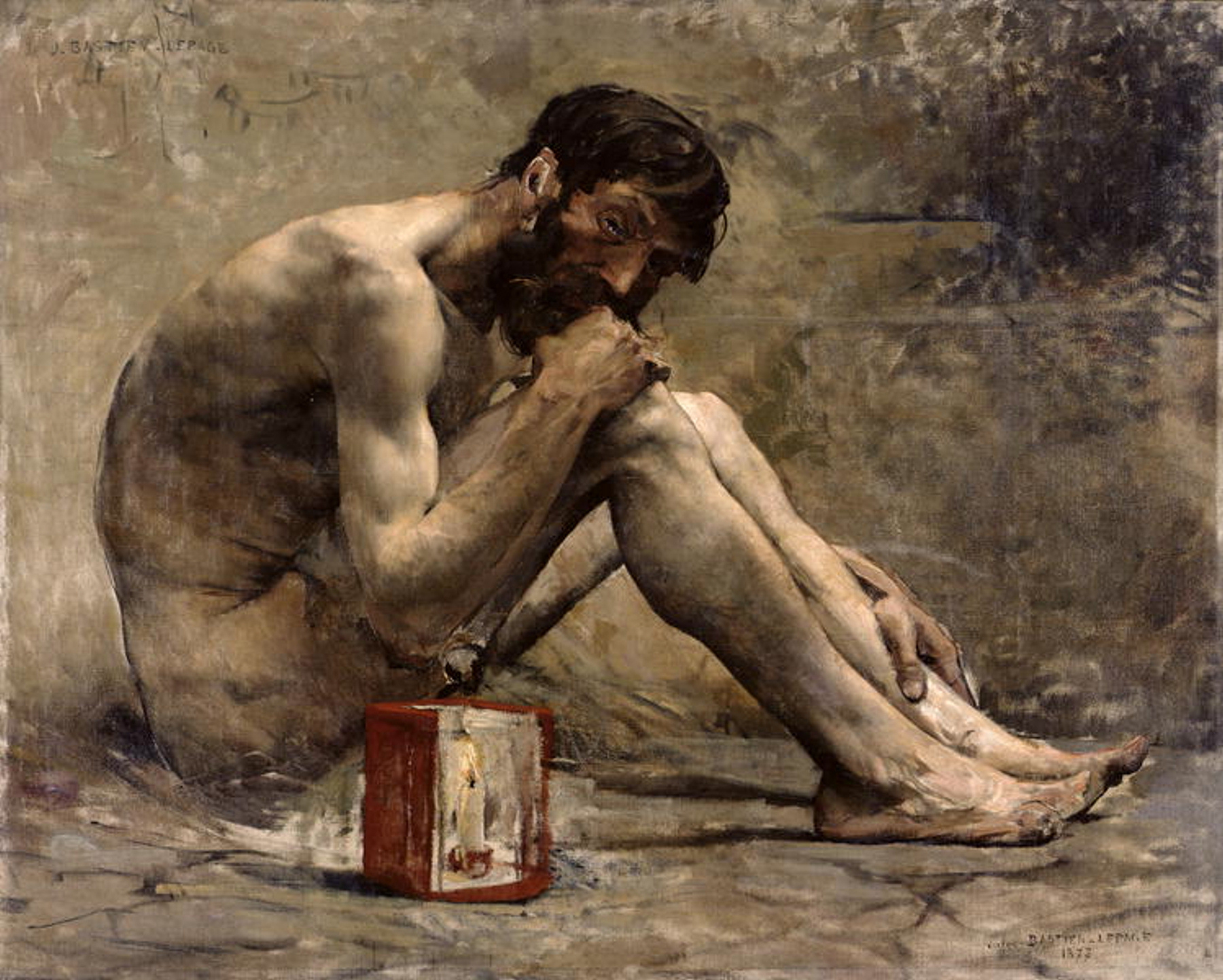 He ridiculed people on the streets, disrespected authority, broke with all forms of etiquette, and didn’t care about personal hygiene. On top of that, he defecated, urinated, and even sexually gratified himself in public.

When you think of philosophy, the shameless behavior of Diogenes the Cynic probably isn’t the first thing that comes to mind.

Diogenes strongly opposed social values and institutions, because, according to him, these are at odds with human nature.

He believed that human society infused us with all kinds of unnatural desires that are not only obsolete, but also prevent us from being happy. Therefore, we should strip ourselves of these corrupting man made constructs, so we’re able to live how we’re supposed to live: in agreement with nature.

Diogenes’ stance toward everything cultured was very obvious. He practiced what he preached, behaving obscenely, with no regard for convention. It’s no surprise that people called him ‘doggish’, dog-like, or simply ‘the dog’.

This video explores Diogenes’ philosophy, and what we can learn from his ideas.

A pupil of Socrates named Antisthenes laid out the first ideas of what would later become the philosophical school called Cynicism. The word ‘cynicism’ comes from the ancient Greek word kunikós, which means ‘doggish’, referring to Antisthenes’ follower Diogenes, who was born in a Greek colony named Sinope.

It’s not certain if Antisthenes and Diogenes have ever met, but he and the doggish philosopher definitely shared their preference for living a life of poverty. Both would have agreed that wealth isn’t a matter of possessions.

Wealth and poverty do not lie in a person’s estate, but in their souls.

There’s a difference between modern-day cynicism and Cynicism as a philosophy. Cynicism, as it’s used today, refers to a negative stance towards human nature. Or as the Cambridge Dictionary defines it: “The belief that people are only interested in themselves and are not sincere.”

The ancient Cynics, however, weren’t negative at all towards human nature. They just fiercely opposed the societies that humans create for themselves, which, in their opinion, prevent them from living in agreement with their true nature.

Thus, they criticize human behavior, but do believe that we can be cured.

Chapter 1: The dog – his life, and his actions

Diogenes was the embodiment of poverty. He lived in a barrel near the marketplace in the city-state of Corinth. He owned nothing except for some old rags, and a bowl to eat and drink from. When he saw a child drinking water using his hands, he threw away the bowl as well.

Even though he was poor, and rejected social norms and customs, he wasn’t cut off from society. In fact, as the odd man out, he challenged people by striking conversations and confronting them with their faults.

The famous philosopher Plato was a contemporary of Diogenes, who believed that ideas are the basis of reality. Diogenes, however, criticized him for being too theoretical. He often mocked Plato by disturbing his lectures.

On one occasion, Plato was given praise because of his definition of a human being, namely: ‘a featherless chicken’. As a response, Diogenes plucked a chicken, entered Plato’s Academy, and said: “Behold! I’ve brought you a man!”

In a way, we could see Diogenes as an anti-philosopher. He rejected the necessity of an expansive ethical system and all kinds of other academic fuzz.

His philosophy was shown through his actions, and this method was the key to his success: his down-to-earth philosophy was easily accessible by the masses, and Cynicism as a philosophical school would later flourish in Greece and Rome.

Plato, despite acknowledging Diogenes’ brilliance and wit, disapproved of his obscene behavior, and called him: “Socrates gone mad.”

Plato certainly wasn’t the only one he mocked. One day he visited the marketplace in broad daylight with a lantern, examining random people, saying: “I’m looking for a human being. I haven’t found any”. Of course, he meant to say that everyone he encountered in the marketplace had already lost touch with their humanity.

He tried to convey the same message by walking backward through the porch. When people laughed at him, he challenged them by asking:

It was probably amusing and frustrating at the same time for Diogenes, to see the people’s blindness to the predicament they had built for themselves, and the ridiculous standards they expected each other to conform to. Thus, Diogenes wasn’t living just for himself: he also attempted to enlighten the people around him.

Many anecdotes describe Diogenes as ‘dog-like’ or ‘doggish’. When he was asked why people describe him that way, he replied: “I fawn on those who give me anything, I yelp at those who refuse, and I set my teeth in rascals.”

However, one day he took his aspirations to be ‘dog-like’ to a whole new level, when a group of wealthy Athenians at a banquet disrespectfully threw bones at him. His response: lifting his leg, and urinating on them.

Probably the most famous anecdote about Diogenes is the one in which he mocked Alexander the Great. Alexander the Great was a king of Macedon, and one of the most successful military commanders in history. During his rule, he was able to establish an empire stretching from Greece to India.

When Alexander stayed in Corinth, Diogenes took not the slightest notice of him, as opposed to many other philosophers and statesmen, who hurried to congratulate their monarch with his accomplishments. Alexander wished to meet this doggish man he had heard about, so he decided to look for him, and found him lying in the sun.

As recorded by ancient Greek philosopher Plutarch, I quote:

Diogenes raised himself up a little when he saw so many people coming towards him, and fixed his eyes upon Alexander. And when that monarch addressed him with greetings and asked if he wanted anything, “Yes,” said Diogenes, “stand a little out of my sun”.

According to Plutarch, Alexander was struck by this treatment. Showing great admiration for Diogenes, he told his followers: “If I were not Alexander, I wish I were Diogenes”.

There’s no consensus about how Diogenes died. Some say he died because of rabies (as he was always surrounded by his best friends: dogs). Others believe he died of food poisoning, and some say he ended his own life by holding his breath.

Chapter 2: A philosophy of independence

Now, after sharing a few of his anecdotes, let’s explore why he did what did, and what Diogenes’ philosophy entails.

The Cynics pointed to the meaninglessness of civilized life, showing that human beings aren’t bad creatures in themselves, but have created a society that estranges them from their true nature. Similar to Socratic thought, the Cynics believed that virtue and happiness are in our own hands, and, thus, external things that are irrelevant when it comes to achieving them.

Like Socrates, Diogenes believed that a good life was a life of self-sufficiency. Because he owned nothing, and wished for nothing more than the satisfaction of his basic needs, it was easy for him to be content. He didn’t need things like material wealth, and status, to be happy, and couldn’t care less about what people thought about him.

Diogenes enjoyed the small pleasures of life, which are much easier to get by, as opposed to the goodies that society wants us to chase, which often take a lot of effort to obtain. Philosopher Epicurus shared this view, and also rejected the chase of pleasures that cost us more than we actually receive.

Take the chase of material wealth, for example. Diogenes thought of money as the mother of all evil. And let’s face it: society expects us to stretch ourselves beyond our means to achieve the superficial goals it lays upon us. Some people are even willing to commit immoral acts including violence and murder, just to obtain money. And for what? Most of the time, for buying stuff they don’t need to impress people they don’t even like. Thus, when we take social pressure out of the equation, what’s the point of chasing material wealth?

Diogenes pitied all those people that are stuck on the hamster wheel, running in the hope of getting what they never will, unless they free themselves from the societal rat race, live a simple life that’s natural for our species, and enjoy the present moment. This, he considered a shortcut to virtue; a much easier and convenient way to be happy.

From Diogenes’ point of view, dogs are great teachers on how to live in agreement with nature. They relieve themselves whenever they want, eat when they’re hungry (and whatever they can find), copulate in public without shame, and live in the present moment without anxiety. In regards to the last characteristic, we could say that what many spiritual seekers are looking for, dogs already have.

Even though a life of poverty may seem a very disempowering position to be in: Diogenes’ way of life made him extremely powerful. After all: he was independent of external factors, and therefore, no one could do anything to him.

He himself, and not the outside world, was in control of his happiness. Moreover, Diogenes sought to live a life of toil. Because by deliberately living a hard life, we do not only become stronger, but also more capable of enjoying the little things. An example of this was that he frequently begged from statues, which he saw as a practice of being rejected.

Diogenes the Cynic was infamous for behaving like a dog, living in barrel owning nothing more than some old rags. He was a man of simplicity. His philosophy, Cynicism, is not based on complicated systems of ethics and vast academic works. Rather, it’s based on actions.

Diogenes criticized modern society and how it separates people from their true nature. His philosophy is meant as a cure for the pitiful human condition. It encourages us to live a life of toil, break with convention, renounce externals, and enjoy the here and now.

Diogenes practiced what he preached: his anecdotes portray his unconventional behavior. He really didn’t care about the things that society tells us to care about. Status, money, social norms: Diogenes ignored them all.

There are quite some similarities between Stoicism and Cynicism. Thus, it’s no surprise that Stoicism descends directly from Cynicism. Biographer Diogenes Laërtius wrote that Zeno, the founder of Stoicism, had written his philosophy “on the dog’s tail”, as he was instructed by Diogenes’ sexually exhibitionist pupil Crates.

Stoicism is clearly a philosophy for those who seek to participate in society, and work together with their fellow human beings. Cynicism on the other hand, is a philosophy for outsiders. Both, however, support the idea that the attainment of happiness, virtue, and inner peace is entirely within our control.